Thia smiles because she knows she's not going anywhere.

All right guys, first things first. THIA MEGIA MADE IT ON IDOL! Was there ever any doubt? Of course not, not even when she was the last contestant through, narrowly beating out the poor girl who got rejected for the seventh time -- and on her birthday. Previous America's Got Talent tenure aside (she was too young for Idol then!), Thia was clearly meant for the Idol stage. It was a bit of a rough road, what with that mean vocal coach and some possible jeggings action, but I'm absolutely thrilled that I'll be able to vote for the adorable 15-year-old this week. Go Thia! It was pointed out to me last week in the comments that fellow Idol finalist Clint Jun Gamboa is also of Filipino descent. I had seen some blogging about this, but nothing definitive. I'll consider him a member of the team, but I'd love some confirmation, if anyone has any. This question of whether or not Clint "counts" is an interesting one; let's come back to it in a sec. Clint sings soulfully about how I've been snubbing him.

From great news to terrible: Dale got the boot from Top Chef. This was seriously a shock; I assumed he'd be in the finale for sure. As soon as country fried Paula Deen showed up, Dale's usual confidence was shot: "Paula Deen is so far from my flavor spectrum ... I work in a Chinese restaurant, for god's sake." Uncharacteristically negative for Dale, who until now had tackled just about every challenge head-on. Maybe the disaster that was Italian week was still looming in his mind? Once he got going during the elimination challenge, it quickly became clear that he had lost control, and even he knew that his food was suffering. Dale, we are all so incredibly disappointed to see you go, but I do believe you when you say you leave the show a better chef and a better person. Catch you at Buddakan one of these days, I promise. Dale looks like he's concentrating on his ladle, but he's secretly thinking, "Crap."

I was let down by RuPaul's Drag Race, but thankfully it wasn't the debacle that was last week. For "The Snatch Game," Manila chose to be former Filipino first lady Imelda Marcos, complete with sparkly Philippines flag-patterned dress. There was more of an identity to her character this week, mainly in terms of specificity (she was imitating a particular person, not a general "Asian lady") and sense of humor (her visual joke using piles of Marcos' trademark heels and the verbal joke of shoe and various glamor allusions held together, if in a bit of a one-note way). What bothered me was how Shangela and some of the other girls felt that it was "okay" for Manila to play a Filipina because she is Filipina. Oh, girl. If we start making rules like that, then can a black drag queen not do Cher? Can a British actor not play an American? Can a gay actor not be cast in a straight role? Allow me to repeat what I said last week and explain that Manila's previous reporter act wasn't offensive because Manila isn't Chinese (or whatever the heck she was supposed to be), but because her act wasn't funny. Playing up an unhealthy shoe obsession: giggly! Exaggerating an accent to sound like an idiot: not so laugh-worthy. You see what I'm sayin'?

Raja, meanwhile, played a fun Tyra Banks (her former employer!). I feel like she could have taken the impression even further, what with how over-the-top the actual Tyra is, but I can't be mad at Raja's smize-ing until her eyes bled. Of course I can't not mention Raja's runway look, which was "African princess" with facepaint and necklaces. I honestly don't mind the visual shortcuts to culture when it comes to drag: I was fine with Manila's sushi earrings and Hawaiian pineapple dress/clutch from earlier in the season because a runway is all about a look, and I can handle some corner-cutting when you don't have the luxury of explanations and discussion. I did cringe when Raja went into some "African" clicking, which to me is a bit lazy and therefore treads in the waters of not-okay. I hate to pick the girls apart every week like this, but I think there is a line that one must be aware of, and I honestly don't think it's that difficult to stay on the right side of that line. All you have to do is be a good drag queen: entertain, be funny, and above all, work hard and don't take shortcuts. Better act, happier race-aware viewers. Win/win! Speaking of Tyra, I thought Survivor was bad with its incredibly white cast this season, but America's Next Top Model is low on the flava this cycle as well. What gives, Tyra? Usually you're so good about bringing all the different kinds of beauty you claim to love. Aww.

To switch gears completely, things on Top Shot are more or less progressing as they have been. Jay continued to act selfishly, adjusting the shared rifle halfway through his team's shooting practice, thus messing up the calibration for all the teammates who preceded him. When his team was up for elimination, they decided as a group to all vote down team member Jermaine, who messed up the group challenge, but then two people got fed up with Jay's antics and made a last-second switch, voting him into the elimination challenge as well. For some reason, Jay finally realized that he couldn't trust his team -- uhh, you think? This is Calvin Tran all over again! Why is it so difficult to understand that acting like a self-centered jerk makes people not like you?

Jay interviewed that he bought his first gun less than a year ago (further highlighting how ridiculous it is that he's giving these trained professionals any kind of advice), and when he worked with the gun pro, who pointed out that Jay was using a technique from the '70s, he brushed the expert's advice aside. Then in an especially hilarious edit, we saw Jermaine practicing his stance outside the contestants' house while Jay napped. Incredibly, Jay beat out Jermaine by one point and stays for another week. Will he learn his lesson from his teammates' betrayal? Something tells me that ain't likely.

I'm super excited that I get to tell you guys about another semi-obscure reality show that I've gotten into lately: Face Off is a show on SyFy that pits special effects makeup artists against one another; think Project Runway but swap the pretty gowns with elephant noses, alien fetuses, and various other amazing and gross silicone and latex creations. This week the contestants had to work with wedding couples to make the groom look like a bride and the bride look like a groom. I bring this up because two of those couples were Asian. One contestant, having the advantage of being the first to choose his team's couple, said, "When I see this pretty Asian man I'm like, 'Done, I want him.'" Admittedly, the groom-to-be did indeed have what could be called a somewhat feminine face. Later during the consultation, the groom was asked whether he'd mind getting his eyebrows plucked. "He plucks them anyway," his fiancee quickly replied. Um, I love this couple? I loved them even more when the bride was transformed into a rockin' Elvis, complete with guitar, and the groom turned into a very pretty, very pregnant Vegas bride. Love it! The artists working with the other Asian couple decided to age their models in addition to switching their genders. This immediately made me think of an early (perhaps the opening? I can't remember) scene in Inception, where we see a very, very aged and nearly unrecognizable (to me, anyway) Ken Wantanabe. "That is NOT how Asian men age," I whispered angrily to my movie companion at the time. "He looks like an old white guy!" Of course I realize that old age makeup is incredibly difficult, and that two contestants chose to do it with the extreme time constraints of the show was a little crazy. They weren't entirely happy with the end result, but I was personally pleased to see that the models were wearing traditional Korean wedding hanboks, which were not really mentioned or explained, but added to the feel of the models' look. See that, Calvin? Even a couple of white SyFy reality contestants can get their hands on hanboks in LA. No reason you couldn't have. Yeah, there's a little bit of melty face going on.

Glee was light on the Mike and Tina time this week, but I did enjoy when Mike, nursing a shared hangover with his fellow glee members, woozily shared, "I told my mom I had the flu and she made me a traditional tea made out of panda hair." Kind of stupid, kind of hilarious. That about sums up how I feel about Glee overall, so I'm good.

Later in the episode, Rachel was crushing hard on Blaine, dreaming of their "vaguely Eurasian looking children." I believe this is the first time the show referenced actor Darren Criss's half-Filipino roots, and it brings to mind a question ... a pretty big one that I touched on with Clint above. On television, which is an inherently visual medium, how important is it for actors to "look" Asian? Of course, multi-racial people grapple with the racial politics of appearance all the time, and getting prescriptive about people's racial identity is not somewhere we want to go. But is television a different matter? TV shows often don't have the time (or, frankly, the inclination) to delve into actors' backgrounds, identifying and exploring the different racial and cultural groups that they are a part of. Mark-Paul Gosselaar of Zack Morris fame, for example, is part Indonesian, but that certainly never came up on Saved by the Bell. Saturday Night Live alum (and embarrassing movie generator) Rob Schneider is part Filipino, a fact I personally only ever hear when he's justifying his playing an Asian caricature, as in (sigh) I Now Pronounce You Chuck and Larry, when he got his eyelids done to play an Asian minister.

Those are both (admittedly odd examples of) Asian American actors, and yet you'd be hard-pressed to find anyone who would identify them that way. On the other hand, actors like Daniel Dae Kim or Danny Pudi are immediately identifiable as Asian American. Is it important to "seem" Asian and/or to have an Asian-sounding name when it comes to appearing on television? I try my best to include everyone I find on the shows I watch, but I have and definitely will miss people whom I simply didn't know have any Asian roots. Is that a bad thing? Irrelevant? Something that more TV writers need to be aware of? I'm still not sure myself, but I'd love to know what you guys think! 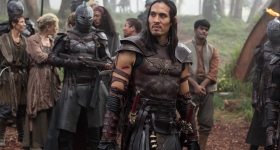