The impetus for
So Yong Kim’s career in filmmaking was simple, and she’s aimed to keep it that
way ever since.

Kim debuted her
third film, For Ellen, earlier this month after her two previous
projects, 2006’s In Between Days and 2008’s Treeless Mountain made
waves in the indie film circuit.

It marks the
Korean American filmmaker’s first English-language film, as well as her most
personal project to date.

Starring Paul
Dano and Jon Heder, For Ellen captures a moment in time when rocker Joby
Taylor (Dano) hits rock bottom, with a career going nowhere fast and the risk
of losing custody of his young daughter, Ellen (Shaylena Mandigo), looming
dangerously over his head.

Ellen is equal
parts head and heart, and Kim’s decision to write the narrative stems from her
own experiences growing up with an absentee father.

Here, Kim tells
Hyphen about her love for storytelling, how she manages to write with two young
children in the house, and what she’d want to do if she weren’t a filmmaker.

The story behind For
Ellen is loosely based upon your own life growing up. What spurred you to
create a film that is so personal?

The idea came
about from memories that I had from meeting my father, who came to see us when
I was six or seven. He walked into the house a stranger and said, “Hi, I’m your
dad.” And then he disappeared. He was never in my life before and then
afterwards, he was never in my life. So I have this memory, but for me, it’s
not just a memory. I wanted to explain and discover and learn about someone
like that, because I never had a relationship with someone like that before. So
I guess it kind of started with that moment, but I wanted to tell the story
from his point of view. The whole journey, in order to understand him better.

Your story
telling style is so calm and reflective. How did you keep manage to keep that
vibe consistent in all of your creative works?

With all three
scripts, I tried to keep things as simple and as minimal as possible, without
much flourishing descriptions or camera moves and all that. I find writing
extremely difficult. So when I write, I try to make it as simple as possible.

I think with For
Ellen, I finally got the script to a point where (the actors) could use it
as a blueprint. I realized on set that (Dano) could go in so many different
places than what I had initially imagined, so I thought that was the best way
for the actors to do it. For me, the script is just a guideline or blueprint
that I start from and then hopefully, what I have on film afterward is better
than that.

So writing isn’t
your favorite thing. But what is your personal writing regimen and how do you
overcome writer’s block when you’re working on screenplays?

My husband
(fellow filmmaker Bradley Rust Gray) and I have two kids, and they’re 5 and 1,
so things are different around the house now. When we didn’t have children,
Brad and I were always like, ‘Oh, we’re working’ so we had to have the perfect
quiet space but now it’s totally chaotic. So now I get up super early before
they get up, which is really rare, and then I find it best to write early in
the morning.

My desk is
literally between the bathroom and the hallway, so I try to squeeze myself in
there and start writing. I think it’s just a matter of now realizing that it’s
more a mental than a physical space that I need - or at least, I’m trying to
train myself that way. And if I have a moment during the day, I just collect
notes, a lot of notes, so then when I sit down in front of the computer, I’ll
have 30 minutes or an hour of just typing stuff. But I don’t know how other
people do it (write). It’s just an impossible task.

What prompted you
to write and get into films in the first place?

I think for me
the main thing was always the storytelling. I worked on Brad’s first film Salt.
We made the film in Iceland with just Brad, myself and the DP, and it really
made me feel like, “Wow, you can make a film as simple as that?” I mean, it was
so easy. Well, that’s relative, but it did make me think, “Wow, I’m going to
try to tell the story.” Once the whole filmmaking process was demystified for
me, I knew I wanted to tell stories and I thought I’d try that, and that’s how
I got into film.

If you hadn’t
gotten into film, what do you think you’d be doing as a career? Or just in life
in general?

I went to art
school, so I originally really wanted to be a painter. Later in life, I’d love
to pick up painting again. It’s so wonderful, and I still feel connected to art
in a way. If I weren’t in filmmaking, I might have gotten a civil service kind
of job, because if I wasn’t writing or directing, I think I’d actually prefer
not to be in the industry.

I did figure
painting and drawing for quite a bit. I was better at drawing though, because
my teachers explained to me that I didn’t have an understanding of colors. So
they actually recommended that I just don’t pursue painting. But when I’m 60,
70, I might just go back to it. It won’t matter at that point what colors I’m
using, because I can just use the excuse that I can’t see properly because I
have problems with my eyes! 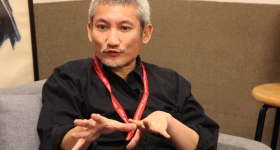