The guys of Mos Wanted Crew let their legs be mostly free.

We have a new addition to Duets! One of John Legend's contestants had to leave the show, so he had a casting call and found Meleana Brown from Oahu, HI, to fill the spot. She sang with John on "Endless Love" (love that one), and I had a sneaking suspicion that the judges took Meleana's one-week handicap into account when critiquing her performance. Robin said some barely coherent things about sandwiches (seriously), and Kelly said that John "couldn't have picked a more beautiful partner, good gosh" (Kells, you are adorable). She went on to say that at times Meleana seemed too devoted to achieving technical perfection rather than getting to the soul of the song, an assessment I wholeheartedly agree with. Meleana got surprisingly high scores, ending the show tied for first place out of eight. I don't doubt that Meleana has the chops to do well in this competition, but I'm curious to see what happens once she's on more even playing ground with everyone else next week. Jason had a lot to prove after landing in the bottom last week, and Kelly stressed how much he needs to tone down his nerves during their rehearsal of "Whenever You Call." Once again, his family's presence was in full force in the audience (he called out his brother in particular, aww), and also once again, the judges' remarks targeted his level of comfort on stage. John noted that Jason was looking to Kelly for approval, "like there's an umbilical cord attached." Eek, ouch. Jennifer also noticed how tight Jason's upper body is while he's performing; Kelly responded, "You don't even know how sexy he is." It really is a shame that he seems to be so slow to find an ease on stage when he's got so many nice performances out there where his talent seems effortless. Jason landed 7th out of 8, a step up from last week, but not much of one. Pull it together, Jas! Actually, you can even see some tension in Jason's shoulders here, maybe.

Hawaiians abound this week! On So You Think You Can Dance we met Cole Horibe, a 25-year-old from Hawaii who's been studying various martial arts since he was 5. When he first took up dance, he resisted comparisons to martial arts, which he considered separate. Now he embraces the overlap as what makes him unique, blending the directness and focus of martial arts with the grace of dance. Cole explained that his audition piece told the story of a Shaolin warrior who was raised to feel no emotion and must perform ruthless executions (intense!). The judges loved it: Nigel compared Cole's control and speed to Bruce Lee, asking if he's won many martial arts competitions ("Not too many," just a silver medal at the Junior Olympics ... NBD) before asking what dance training he's had. Turns out Cole's studied jazz, modern, hip hop, ballet, and ballroom, among others ("Such an overachiever," guest judge Jesse Tyler Ferguson marveled). Mary called Cole "simply spectacular," describing his legs as "lightning" and "lethal." Is it any surprise he was sent straight to Vegas?

We also got just a brief moment with our old pal Hero McRae of America's Best Dance Crew domination and the SYTYCD auditions last year. Her popping and locking was as sharp as ever, and Mary said that she could tell that Hero had improved. "I was practicing!" Hero exclaimed before getting her ticket and adding "Domo arigato, Nigel!" I hope she makes it further this year! Love her.

Speaking of ABDC, this week the opening group performance was set to "Live My Life" by Far East Movement with Justin Bieber. A little weird since the episode's superstar was LMFAO, but hey, whatever! Mos Wanted was voted into safety yet again, and they had to perform to "I'm Sexy and I Know It" with a little help from LMFAO choreographers ... Quest Crew! This week was just a revolving door of ABDC champs. Mos Wanted's dance involved not one but two pants tear-offs, which D-trix called "giving the ladies what they want." He also proclaimed that this was their most entertaining performance of the season. Lil' Mama said that she prefers the boys with their pants on and felt a little disturbed. I have to say, I kind of agree. You guys are totally hot and all, but please keep the trousers on. JC said that Mos Wanted had LMFAO's charisma (definitely the reason they've never been at the bottom), but the routine felt slow at times, and he didn't think they were taking it to the next level. Valid, for sure. In the background: discarded pants.

8 Flavahz landed in the bottom two with Rated Next Generation again, and it seemed that the judges were bummed that they couldn't hand out a free pass a second time. The girls got "Party Rock Anthem" and donned cute wigs and glasses to look like Redfoo. Unfortunately, they had a member sit out once again, as Tiara hurt her back last week. Still, the remaining seven girls did well, with both Lil' Mama and JC complimenting their energy. D-trix mentioned their push flip, a maneuver he invented but was never able to do with more than two people (8 Flavahs did their version with three). However, JC did point out that the flip didn't land completely successfully. Still, the girls were saved in the end, so it's on to the final three! 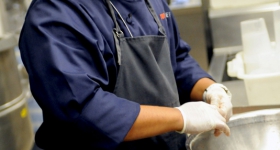