It's 1920 in Los Angeles, and Japanese
immigrants are spending another restive night trying not to die an ignoble
death in a foreign country. Ishikawa Sakuzo, a Japanese immigrant lies, begs,
and gambles in order to survive his "good-for-nothing" life in
Japantown. Osato, a newly arrived Japanese bride, struggles to survive after
her gambling-addicted husband Ryosaku runs out on her. She works nights in a
bar and eventually owns her own establishment only to find herself remarried to
a dying man.

Such are the lives of the two main
figures in two lost (that is, overlooked) novels of Shoson Nagahara, which have
been translated by Andrew Leong and reissued under the title Lament in the Night. Nagahara's work
focuses on the lives of those attempting to escape poverty, whether through
get-quick rich schemes played out in gambling houses or mining camps, or the
bone-aching labor exerted in restaurant kitchens, or as house servants. In
Nagahara's work, these bleak lives are not portrayed for sentimental value, but
as part of the raw urban reality of 1920s Los Angeles.

In an excellent introduction by David L.
Ulin and an afterword by Andrew Leong, the stories in Lament in the Night are placed in cultural context. Ulin considers
how Nagahara wrote these gritty, urban stories in Japanese for his Japanese
immigrant readers in America, many of whom were the Issei who lived and worked
in Los Angeles. Leong speculates on how closely these stories resemble the life
of Nagahara because of the descriptions of an immigrant's struggle not only
with the customs of the country but also the daily fight against hunger,
poverty, and unemployment. And yet, as both Ulin and Leong suggest, more than
documenting Japanese immigrant experiences, the two novels of Lament in the Night meditate on a human
compulsion to survive, a low-burning desire that sometimes flares against the
relentless tedium of poverty.

In Lament
in the Night, Sakuzo slowly walks the alleys of M. N Avenue, constantly
hungry. He furtively looks around to see where he might scrounge up food.
Eventually he wanders into a Japanese restaurant and orders a plate of pork
chops, then feigns that he has "lost his wallet." In this way, Sakuzo
survives another night. But without being able to find a job, he spends most of
his days hungry. On one such day, he encounters Shimomura, a friend he lost
without "any regret or shame." Sakuzo is not looking for sympathy or
kindness. He "knew he didn't have much of a future, that his time was
running out. Sakuzo knew that in the end, he would be all alone." In such
descriptions, Nagahara captures the mood of men like Sakuzo who live because
they choose not to die but are not compelled by ambition, self-worth, or
familial duty to live a better life.

Chie, he almost spat out the curse as he
moaned. He stuffed his hands into his pockets and started to walk down the
street. His fingers slid against the slimy grease of the pork bone he had
stashed away the night before. Suddenly overtaken by a wave of disgust, he
yanked it out and threw it to the ground. The brown, stained paper napkin flew
off and tumbled down the sidewalk, caught by the gentle morning breeze.

No doubt about
it. Everything he did ended up a mess.

Similar to the downbeats of Sakuzo's
story, in The Tale of Osato, Nagahara
fixes on the struggles of the impoverished Osato who was married and brought to
America when she was eighteen. With her husband Ryosaku, Osata attempts to make
the best of a poor situation. But her hard work only leads to more hard work,
not a promised exit from poverty and hardship. As she tries to continue running
her business, the 1920s Prohibition era eventually devastates her finances,
which is further compounded when her new husband falls ill.

In these two novels, Nagahara conveys
the unrelenting difficulties of surviving in Japantown. Although the narratives
falter, at times, with some inconsistencies of time, place, and character
development, they offer poignant studies of the 1920s Asian immigrant class
that is underrepresented in American fiction of this time period. Sakuza,
Osato, and others who lived in California during the years that led to the
Great Depression bear witness to a misconception that hard work will result in
the elusive American dream. Nagahara might have been influenced by American
realist fiction writers such as Frank Norris, whose novel McTeague (1899) was famously adapted into the film Greed (1924) by Erich Von Stroheim. McTeague tells the story of the young man who falls in love with a
parsimonious woman who happens to win a lottery ticket, exposing a world in
which greed and poverty lead to violence and murder. While neither Sakuza or
Osato resort to murder, they are nevertheless forced to endure this harsh,
realist American landscape where physical needs trump moral righteousness, and
breaking the law seems like the only way to survive one more night in
Japantown. 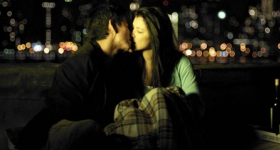