South Asian emcees and DJs take hip-hop into their own hands.

MANDEEP SETHI may not look like your typical mixtape trading, backpack wearing, headphone rocking, hip-hop connoisseur. In fact, when people see Sethi, they see a young bearded South Asian male who wears a black turban and sports Vans shoes, fitted jeans and shirts that express his love for hip-hop and political awareness.

"When people see me on stage, they think I'm going to sing a classic Indian song," Sethi says.

While growing up in California's San Fernando Valley, Sethi listened to Los Angeles underground hip-hop collective Project Blowed and spent his time recording tracks. He made 1,000 copies of his first CDs and his classmates bought 600 of them. This rambunctious teen attended the 2004 Asian Hip-Hop Summit in Los Angles and ended up walking away as the emcee battle winner after serving 12 other lyricists.

According to Nitasha Sharma, an assistant professor in African American and Asian American studies at Northwestern University, South Asian hip-hop isn't a new phenomenon. Like other American youth, those who grew up in urban areas during the 1990's were exposed to hip-hop. And like a lot of young people at that time, hip-hop became a passion and perspective.

Sharma first encountered Desi hip-hop while she was living in Oakland, CA, where she heard South Asian rappers and DJs. As a person of South Asian descent, she was intrigued with the connection between hip-hop and young South Asians. After writing several academic papers on the cultural significance of Desi hip-hop, Sharma is finishing a book on the topic titled Claiming Space, Making Race, which is being published by Duke University Press.

"What's the possibility of hip-hop bridging black and Asian awareness?" asks Sharma. This question is one of the inquiries Sharma is attempting to explore in her book.

South Asian youth are attracted to hip-hop because the genre provides a channel to express what it means to be a non-white in America. But Sharma points out that hip-hop and South Asian immigrant culture are not a natural match.

Even Sethi had to face his family's reluctant reaction to his affair with hip-hop. "When both your parents are in the medical field, hip-hop isn't something they want their son to be interested in."

Despite contradicting views of hip-hop between young South Asians and their parents, the genre provides a conduit for poignant messages regarding the South Asian experience in America.

While there are Asian emcees who subtly infuse their cultural identity into their music, there are emcees like Bohemia the Punjabi Rapper who wear their ethnicity on their sleeve. Bohemia is known to combine his Punjabi lyrics to big hip-hop beats.

"What I do is Punjabi rap ... I rap for my Desis that sometime feel trapped and lost in the Western world," Bohemia says.

At 15, Bohemia and his family moved to the United States from Pakistan. Like Sethi, Bohemia was exposed to hip-hop as he grew up in California. Twelve years later, Bohemia is a hip-hop veteran with his latest album, Pesa Nasha Pyar (Money Drugs Love).

"When I first got into rap, Nas was one of the first emcees that really caught my ear. I would find similarities between his English rhymes and my Punjabi poetry," Bohemia says.

Bohemia grew up adapting to American urban life. He witnessed other Desis like himself immigrate to America at an older age and fall into a harsh street life that included incarceration, deportation and even death. Bohemia chose to tell the bleak tales of another kind of Desi experience, which didn't have money or prestige, in an album called, Vich Pardesan De (In Foreign Land). The album debuted on Bohemia's independent label in March 2003.

Vich Pardesan De perked ears and landed on the BBC Asian Top Ten Charts. A year after his first album came out, several major record labels approached Bohemia. Pesa Nasha Pyar was released by Universal Music Group and Bally Sagoo, a label under ISHQ Records which ushers artists who combine Asian and Western cultures. According to Universal Music India, the album has sold over 150,000 copies.

"Many thought that a full-length Punjabi rap album would not work since it's never been done before. It feels great to prove them wrong," Bohemia says.

Like Bohemia, there are older Desi rappers who have been making music for almost a decade. Karmacy, a four-member group who performs in English and Gujrati, is often attributed to spreading Desi hip-hop across the country by becoming one of the few South Asian hip-hop groups to poke their heads from the underground scene and gain popularity through live shows, word of mouth and grass roots distribution. Sammy Chand, a member of the group, currently heads Rukus Avenue, a South Asian music label based in Southern California.

Representing the females in Desi hip-hop are women behind the turntables, not the microphone. DJ Bella has been spinning a mix of reggae and hip-hop for over a decade. Another notable Desi deejay is DJ Rehka. She's considered one of the pioneers of Desi hip-hop and has been putting the needle to vinyl for 10 years. Her sound was the prototype to Desi hip-hop, combining Bhangra and British Asian music into infectious dance party beats. DJ Rehka mixes community activism with her work as an entertainer, participating in South Asian music and conducting lectures on South Asian culture.

Whether it's reaching into their community, helping other South Asian musicians or making music, these Desis hold the same sentiment as Bohemia when it comes to being a South Asian in the hip-hop industry.

"I give voice to young American Desis who have lived in the west for decades but have had no representation in the mainstream Desi media whatsoever until now," Bohemia says.

Although Sethi's songs infuse cultural messages and carry a Desi charge, he doesn't consider himself to be a true Desi emcee. "I don't label myself a South Asian emcee. I don't need to make that my focal point," he says.

Though Sethi may not call himself a South Asian emcee like other Desi hip-hop artists, he isn't afraid to use hip-hop to write about issues that are important to his heritage. In a track titled 7984, Sethi describes the Indian genocide, which caused his parents to immigrate to America.

"No one is really talking about events like the 1984 genocide," Sethi says, referring to the wave of violence against Sikhs by Hindus in India after the assassination of Prime Minister Indira Gandhi. "I'm getting a little exposure, so I might as well say something."

Asiana Ponciano is a Hawaii-born transplant who currently freelances in San Francisco. Her favorite place to enjoy live music is at the Fillmore or a free concert in Golden Gate Park. 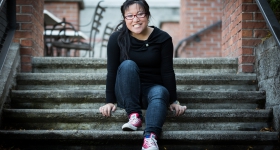