Jazz prodigies make a name for themselves in New York City.

HEPCAT CONVERSATIONAL softeners are rare these days. "You dig what I'm saying?" is one of the slangy phrases Sachal Vasandani drops every so often with a relaxed cadence. Another rarity: young jazz musicians with the natural talent and unswerving devotion of up-and-coming prodigies David Wong, a bassist, and Vasandani, a jazz vocalist.

A resident of the Morningside Heights section of Manhattan, 29-year-old Vasandani is mellow with startlingly good looks. His heritage is Sindhi, an ethnicity native to Pakistan, but his architect parents were raised in Delhi and moved to the United States in the '70s. Vasandani credits his parents' record collection, which included classical European and Indian music as well as a lot of jazz, with stoking his passion for music.

Vasandani, whose debut album, Eyes Wide Open combines jazz standards, contemporary compositions and his own songs, made a decision to become a professional musician at age 16. He planned to move to New York upon his high school graduation in 1996 from Naperville North High School in Illinois, but later decided to defer the tests of that city's real world stages to pursue a degree in jazz at the University of Michigan's School of Music instead-in spite of the fact that there were no jazz vocalists on the teaching staff.

"When I went to Michigan, I was concerned that there was no jazz vocal teacher. But when I left Michigan I was really happy about that, because I was left to my own devices," he says.

Vasandani spent nights transcribing the music of singers such as Ella Fitzgerald and studying the jazz repertoire-even when he had no obligation to do so for class.

"Everything I did there was for New York," he explains. "If I aced a recital, I didn't really care. I always knew that someone was kicking my ass in New York."

David Wong, 25, who has played bass behind Vasandani since 2001, never had to imagine who in New York might be kicking his ass, because that's where he grew up. His family's apartment on Waverly Street was just blocks from the Village Vanguard, a reputable jazz club he began to frequent when he was 14.

Wong, whose father is Chinese American and whose mother is Polish and Russian, is tall with close-cropped black hair and a deep, resonant voice that suits his choice of instrument. Like Vasandani, Wong has years of formal musical training-from the Manhattan arts magnet LaGuardia High School, and Julliard, where he studied classical bass-but learned to play jazz on his instrument largely on his own by transcribing and playing along with jazz recordings and jamming with jazz musicians.

Wong elected to study classical music to build a solid foundation in music. "Classical music has a history and pedagogy that jazz doesn't have. The books for classical bass have etudes from the eighteenth century. There's nothing like that for jazz," he says.

Asked how he maintained his identity as an aspiring jazz musician, Wong jokes, "I wore jazz T-shirts. I thought I was pretty cool." He played jazz CDs for an hour or so each night in his dorm room after playing classical music for five or six hours.

Both Vasandani and Wong enjoyed their biggest breaks as professional jazz musicians in 2006. Vasandani signed a multi-album recording contract with Mack Avenue, a prominent Detroit label. Wong took a job as a bass player in the band Roy Haynes and the Fountain of Youth, led by the legendary jazz drummer Roy Haynes, who is 82. (The Fountain of Youth consists of Wong and two other players, both of whom are at least half as young as Haynes.) He was also hired to play in the Heath Brothers Band, which features saxophonist Jimmy Heath and the drummer, Albert "Tootie" Heath.

Vasandani now has the luxury of joking about his early steps to establish himself musically in New York. Working for a year between 2000 and 2001 as a financial analyst at UBS allowed him to save enough money so that he could live the life of a marginally-employed musician without the deprivations associated with that life. One of his first gigs was at a pita restaurant just around the corner from UBS.

"The pita there wasn't even that good," he says, "but I was singing."

Wong-who met Vasandani through Quincy Davis, Vasandani's drummer-often played behind Vasandani in venues such as the pita restaurant, where patrons tended to be less interested in the music than their food.

When Vasandani landed his recording contract, he made it a condition that he record his first album with his band, rather than more experienced studio musicians.

"Even if I didn't like their music I would have wanted them on the album because they were loyal to me," he says.

"But I love their music. They have the philosophy that they're not done learning and they've got to keep growing, and that's what makes them kindred spirits of mine."

Michael Rymer lives in New York City. His writing can be found at www.michaelrymer.com 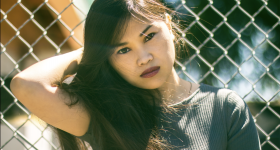