Anna Sew Hoy is a modern-day alchemist. The Los Angeles-based artist takes clay, wood and everyday objects like clothing, costume jewelry, electrical cords and beer cans and transforms them into eccentric, vaguely mystical sculptures that are both aesthetically sophisticated and refreshingly plain-spoken. Although she draws inspiration from the refined traditions of ikebana and Chinese "scholar's rocks" - fantastically shaped stones used as objects of contemplation - her sculptures resist categorization. Meteor, a twisting, helix-like ball of smashed and dented Sapporo beer cans, is an unlikely candidate for meditation, but it simultaneously represents an abstract form, a cosmic rock and the remains of a monster drinking binge. It evokes a wide range of interpretations without settling comfortably into any of them.

Such restlessness creates surprising contradictions. Turning throwaways into treasure, Sew Hoy achieves a transcendent quality with the cheapest of materials. Angel by Thierry Mugler - titled after the perfume - is a delicately curling mass that manages to come across as ethereal, even though it's made of shiny synthetic fabric, fake gold netting and mass-produced plastic birds' wings.

This unironic use of consumer detritus gives her work something of a hippie-kitsch feel. The wall sculpture Display, dotted with rough holes and dangling necklaces, resembles a purse with tassels or a homemade jewelry rack. But it could also be a talisman to ward off evil spirits, or an artifact of some obscure ritual. Circuit connects the natural landscape with the body: its floppy tentacles sprawl across the floor like fallen branches or intestines, or perhaps an exploded circulatory system. Made simply of foam, black jeans and wood, it is both visceral and otherworldly. Like much of Sew Hoy's work, it explores the mystery of being human within a world of generic, disposable things.

This issue's art feature has been made possible as a project of the Creative Capital | Andy Warhol Foundation Arts' Writers Grant Program. Sharon Mizota is a writer and art critic based in Los Angeles.

Los Angeles-based art critic SHARON MIZOTA selected Anna Sew Hoy for this issue's Artwell because of the sculptor's ability to tweak consumer culture: For example, her series of "Scholar's Rocks" are based on the Chinese tradition of selecting fantastically shaped rocks as objects of contemplation. But Sew Hoy's forms are handmade in clay and interlaced with denim or plastic chains. "They're an updated version, reflecting the new 'natural' wonders of our mass-produced reality," said Mizota, co-author of Fresh Talk/Daring Gazes: Conversations on Asian American Art (UC Press, 2003). 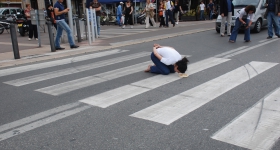