Asian American filmmakers build upon a documentary legacy and expand to the narrative genre.

ASIAN AMERICAN FILMMAKERS are no strangers to the nonfiction genre, as made evident by numerous Best Documentary Oscar nominations and wins. Steven Okazaki has had three nominations and a win for Days of Waiting: The Life and Art of Estelle Ishigo (1991). Freida Lee Mock is among the most nominated documentary filmmakers with five nominations and one win for Maya Lin: A Strong Clear Vision (1994). More recently, Ruby Yang won for The Blood of Yingzhou District in 2007.

Le says the experience motivated her to study film as a means of communication, and to share the stories and experiences not covered in mainstream films.

"Filmmaking allows me to reflect the social issues affecting (for example), Asian American queers, and to reach an audience who can relate to these stories and experiences," Le says.

Although Le began in documentaries, she is currently working on her master's degree in narrative filmmaking. Her thesis project, La Petite Salon, about a Vietnamese hair salon, is in pre-production.

Is there an increasing trend of Asian American filmmakers moving from documentary to narrative filmmaking?

Jessica Yu, who won an Oscar for her short documentary Breathing Lessons: The Life and Work of Mark O'Brien (1994) and who recently directed the comedy Ping Pong Playa, believes that there is no clear trajectory in a filmmaker's career.

Yu felt lucky to have stumbled upon the opportunity to direct and co-write Ping Pong Playa because she had always wanted to do a comedy. Her experience in the fictional realm in short films and television helped create a smooth transition.

"It was a perfect alignment," Yu says.

She explained that in film it's sometimes difficult for directors who have made their name in one genre to explore others. To diversify, she said, "You really have to make an effort."

"When you are making films, you are pretty isolated," she said. "It's hard to know what my fellow Asian American directors are doing right this minute. We pop our heads up at festivals, and say 'Hey, cool!' and just kind of go down again."

At the core of these genres are two very different approaches to telling a story. According to Yu, a documentary film is a labor of love.

"They are stories people feel should be told not for commercial reasons. Certainly with Asian American filmmakers, there might be stories that are personally appealing. If you're a minority and you feel there is a subject or issue that might not hold with mainstream media, you feel compelled to work in documentary," Yu says.

Yu believes there is a unique energy to the documentary film set. "You are capturing something as it happens in front of you. If you don't get [the shot you want], you don't get it. In fictional projects, you have the time to perfect the moment."

The energy is great but lack of funding and limitation in authence are inherent drawbacks to working in documentary film. But while working on Ping Pong Playa, Yu found that Asian American films face struggles regardless of genre.

"It's hard to market a film that has a largely Asian American cast. Also, we have a lead who is a newbie, not in the sense that he can't do it, but people want to know who's that face on the poster," Yu says.

Yang agrees that Asian American films face challenges in reaching the mainstream. "[It is] a complex combination of social climate, development of Asian American stars, and continued refinement of the cinema," he says.

Yang believes that for Asian American filmmakers there must be a delicate balance between maintaining the integrity of Asian American stories and appealing to larger authences. He remains optimistic. "There are exciting times ahead for sure."

Whether in documentary or in fiction, the fact that more Asian Americans are making films demonstrates progress. The hope is that Asian American directors continue to find stories to tell that move them, and use the strong documentary legacy as an inspiration. 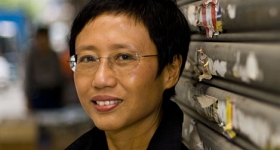