From poop to cultural clashes, Asian American parenting blogs have it covered.

I PAID LITTLE ATTENTION to the baby blogging phenomenon until I became pregnant last year. Then it hit me: I'm going to be a mom. And I know next to nothing about motherhood.

In researching on the web, I quickly became immersed in blogs about cute baby products, green and organic babyhood, child rearing advice and more. But I also longed to read about the real-world experiences of moms, particularly those who could enlighten me on what it's like to be, well, an Asian American mama.

Such information wasn't easy to find. Perhaps not surprisingly, mommy blogs are largely the domain of affluent white women. The most popular one is dooce, a frank and bitingly written blog by Heather Armstrong of Salt Lake City, a self-described recovering Mormon. She is most famous for two feats: chronicling her struggles with postpartum depression and getting fired for blogging about co-workers. (The joke's on her former employers: Her blog now draws millions of readers and earns enough from advertising to support the entire family.)

But where, I wondered, was the Asian American equivalent of dooce? After some searching, I found a number of contenders.

One is MetroDad by Pierre Kim of New York, who has a 4-yearold daughter. I stumbled across his blog during the first month after my daughter's birth and enjoyed it so much that I turned to his archives and began working my way from the beginning (often in the middle of the night as I nursed the baby).

A daddy blogger since his wife became pregnant almost five years ago, Kim, 40, has reflected on his daughter's poop, his travels with her on a plane and, most recently, her amusing antics and nonsequiturs. His blog draws up to 4,000 readers daily, and he's been approached about turning MetroDad into a sitcom. Meanwhile, he also contributes to Rice Daddies, a collective blog by young Asian American dads.

The Asian American parenting blogosphere is small but fast expanding, says Kim, who observes that a generation of Asian Americans is now growing into parenthood. The 20and 30-somethings raised in the United States, in particular, are quite "comfortable sharing their life online - they're not reserved at all," Kim says. Indeed, many have already been blogging and posting photos online. So when their wee ones arrive, they naturally transition into blogging about babies - a trend that Kim predicts is "going to explode."

Kim has declined to allow advertising on his site, saying the blog is for personal enjoyment - and therapy.

"Time does fly by really quickly," he says. "I reread things [from MetroDad archives] I've completely forgotten about. It's nice to have those reminders of different stages. You forget how crazy it is. Now I look back and laugh."

As an Asian American parent myself, I realize that I can't separate being a mom from being Asian. This reality enters my thoughts regularly as I raise my daughter, who is Chinese and Korean. And the same kind of awareness is what I most appreciate about Asian American parenting blogs.

In concrete terms, Asian Americans "have to change poopy diapers just like [any other parents] do," but they also include "mamas who try to feed the baby kimchi when they're 6 months old," says Stefania Pomponi Butler, contributor to Kimchi Mamas, a collective blog by Korean American moms, and mother of two girls in the San Francisco Bay Area.

Pomponi Butler, 39, is also the author of CityMama, a personal blog about parenting, and cofounder of MOMocrats, a politically-oriented blog. Her writing is featured in the book Sleep is for the Weak, a compendium of mommy bloggers.

Unlike Kim, Pomponi Butler accepts advertising on her sites, but for her it's icing on the cake: Her income comes primarily from working as a consultant who connects bloggers with businesses.

Mary Choi, another Kimchi Mama contributor and mother of a 2-year-old in the San Francisco Bay Area, also values the ability to connect parenting experiences with ethnicity.

Indeed, a truism for Asian American parenting bloggers (and readers) is that the nuances of cultures, traditions and language differences add a layer of complexity to the usual parenting dilemmas. Indian American mom Deepa Sood, who posts her musings on a personal blog titled Devis with Babies, elicited readers' thoughts about "sleep training" (teaching a baby to sleep on its own, often by letting the baby cry). Sleep training was considered "American," going with the flow. Letting the baby sleep in the parent's bed, on the other hand, was a more "Indian" approach.

In her blog, Sood - a mother of two in Berkeley, CA, with a third on the way - addresses "a lot of issues that aren't as covered in other mainstream blogs." She writes about how to grapple with "culture and how to raise kids in America today," and how to do so in a way that "[lets] them know where they came from."

Parenting blogs, in general, are not a universally appreciated phenomenon. Some critics dismiss them as self-indulgent and/or poorly written navel-gazing. Why, critics scoff, would people want to read about someone else's children?

In my exploration of parenting blogs, I find that some indeed are not worth my time. But others have prevailed in the blogosphere for a reason. The best of them are well written, amusing and insightful. They reveal what parenting is like. For new and prospective parents like me, they chart milestones to anticipate and developmental stages to prepare for. They also afford comfort: I know I'm not alone in the struggle to get my baby to sleep through the night.

Ellen Lee is a former technology reporter for the San Francisco Chronicle and mother of an adorable baby girl.

Since having a baby last year, ELLEN LEE has become "obsessed with everything baby and parentingrelated," making her the perfect person to report on Asian American parenting blogs for this issue's Redux. Lee, a former technology reporter for the San Francisco Chronicle and a national board member of the Asian American Journalists Association, says this story made her reflect on how post-1965 immigrants are raising a generation of Asian Americans in ways that contrast with, yet resemble, their own upbringings. One piece of wisdom gleaned from Lee's own family: "Take all the opportunities available to you." 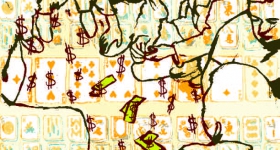