An adoptee tells her story, from prison birth to prison reform.

My world spun out of control when I found out that I was born addicted to heroin in the Alderson Federal Prison for women in West Virginia - a long way from where I lived with my adopted family In Seattle. When I was about 12, I found a letter hidden in my mother's dresser drawer that she'd written to the family attorney. She wanted to change my birth certificate to remove my birthplace, Alderson.

I already knew I was adopted by then and my racially ambiguous looks troubled me. My caramel-colored skin was more Latina than anything, but my eyes suggested Asian in me somewhere. Others thought I was biracial, meaning black and white. Altogether, I differed from my parents' Eastern European looks. Only later would I find out my background: part Greek and a blend of Taiwanese American, Latina and more - at least as much as family stories and DNA testing can tell.

For years on my school bus rides home from elementary school, I endured name-calling. The surprise and confusion of the first time I heard a girl's voice whisper "nigger" behind me turned Into biting my cheek to brace myself against the inevitable words. A small mound still scars the inside of my mouth.

Like many adoptive parents, mine thought love answered everything. "But you're just one of us, dear, and we love you," my mother would say whenever I told her I faced prejudice. As much as she wanted to help, I needed more than love to understand the confusion and injustices I faced out in the world.

Over time, a wedge between us grew and it would take over a decade to dissipate. I was a wild child in the making. Drugs, drinking and running with a crowd of crooks gave me all I needed then. At 14, I started street drugs; and by 19, I loaded a spoon of dope and cooked it up for the first time. My palms began to sweat, heart beating fast as a horse on the race- track. It is a feeling common for all addicts, as if struck by lightning in heaven, part birth and part death. Not by rational thinking but by instinct, I knew my chances of surviving heroin addiction a second time would be slim, so I stayed with amphetamines. More than once I drugged past my limit, just this side of dying from overdoses.

My life spiraled down, and I had nowhere to go but up. I'd experienced too many near-death episodes and knew I'd either end up dead or in prison. So, I white-knuckled my way through withdrawal, sought help from counselors, reconnected with my family from whom I'd been estranged for years, and worked my way up. I moved to Minneapolis, where I now live, to clean up. I've remained clean ever since.

While many adoptees seek to figure out where they came from and how they fit in, my story is compounded with the odds against me from the beginning. I'd already survived heroin addiction at birth - only 50 percent of heroin babies survive, and the recovery rate is just 1 9 percent for non-white drug addicts who start underage 16.

Still haunted by my prison roots, some years ago I requested a tour of my birthplace. I flew to the small town in the Appalachian Mountains and received a private tour. A prison officer led me into a two-story building, each floor a long row of rooms on either side of the hall, and pointed into the open door of Room No. 7. "This is the room you shared with your mother," she said.

It was the most profound feeling I've ever felt, like a wild animal with its severed limb just reconnected. Here was the place of my birth: the room where I lived, slept, ate, crawled around and was carried as a baby for a year in prison. I scanned the 10-by-6 foot room, just enough space for a table, chair and bed to fit. The only colors were tan and beige. Everywhere on that tour, the scent was oddly familiar - even the room once used as a hospital delivery room.

Afterward, as the warden walked me toward the front of the compound, we stopped at a white picket fence in back of her home on the grounds. "These are the babies that didn't make it," she said, her voice almost in a whisper. The fence embraced six grave markers. You were a lucky one, I remember she added.

At that moment, standing there at those gravesides, I recognized my good fortune. I vowed to reach back and give back to my roots. I thought, who better than someone like me who had made It out the other side?

Shortly after, I started a year of quarterly visits to Alderson, where I led writing workshops with the same group of women time after time. I began to tour other women's prisons across the country to speak about resilience, hope and positive attitude. I share my story as proof that the past does not always define the future. My goal Is to establish regular speaking engagements and workshops at each of the "Big Six" federal women's prisons.

I now feel obligated to use my story to make a difference for children of prisoners, especially daughters of mothers in prison. The fastest-growing prison population is women, with the number of incarcerated mothers exploding 131 percent from 1991 to 2007. Nearly 1 .7 million children under 1 8 have at least one parent in prison. When women with children are sentenced, often the kids are left with no means of visitation while their mothers are away.

My goal is to start a nonprofit and develop two programs for school-age daughters of women in federal prisons: one, a summer residential camp for young girls in grades K-6 whose mothers are incarcerated; and a second program to provide college scholarship funds for high school senior daughters of women in federal prisons. While I've carried this dream and vision for years, I've just begun the planning for these programs and am seeking further funding.

Now that I've broken the cycle of drug addiction and incarceration, I've also continued the cycle of second chances. My two daughters are adopted from China and they benefit from what I've learned, that we can rise above our misfortunes. I teach my children what I know first hand: that life is mostly about attitude and that adversity does not have to dictate the course of our lives.

Deborah Jiang Stein is a freelance writer and creative consultant who lives in Minneapolis with her two young children. She can be reached at www.huffingtonpost.com/deborah-jiang-stein and muttslikeme.wordpress.com. 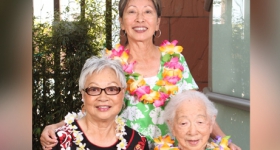