The Learning
Directed by Ramona Diaz
cinediaz.com
The Learning tells the story of four Filipina women, who are a part of a group of 600 immigrant teachers working in Baltimore schools today. In this documentary, we follow these four women as they attempt to overcome a myriad of obstacles during their first year in the United States: undergoing the visa process, teaching inner city students, keeping in touch with distant relatives over Internet chat, struggling with the culture shock of urban Baltimore. The film nicely captures the emotional arcs within these women’s struggles, but also leaves unanswered a number of questions: Why are immigrant teachers necessary and why particularly from the Philippines? Why do the teachers all seem to be women? And finally, what’s the story behind their pay, fees, rent and other finances? Still, as an examination of education and the immigrant experience, there’s enough fascinating story to keep one hooked. The Learning aired as part of PBS’s POV series in September.

Wedding Palace
Directed by Christine Yoo
weddingpalacemovie.com
Wedding Palace tells the story of Jason Kim (Brian Tee, The Fast and the Furious: Tokyo Drift), a Korean American living in L.A. whose family is cursed (the story of which is shown in an imaginative animation sequence). He must marry within the year (by his 30th birthday), or face mortal demise. His relationship with a long-term girlfriend doesn’t work out, neither do setups orchestrated by his meddling parents. Eventually, a business trip to Seoul leads Jason to the seemingly perfect Na Young (Hyejung Kang, Oldboy), but several wrenches are thrown in the way of their budding relationship. The movie’s impressive cast is composed largely of Korean and Korean American actors — including comedians Margaret Cho and Bobby Lee — and much of the dialogue is in Korean. Clearly inspired by Korean comedies (think of 2001’s My Sassy Girl), the story and characters in Wedding Palace ring true, albeit a bit silly. First-time director Yoo has done a nice job of hitting universal notes of love, romance, family and obligation in a Korean American version of My Big Fat Greek Wedding.

One Kine Day
Directed by Chuck Mitsui
onekinemovie.com
In Chuck Mitsui’s directorial debut, Ralsto (Ryan Greer) is a sweet-faced skater who, in order to raise funds for his girlfriend’s abortion, gets caught up in a fix that walks a line between tragedy and folly: a cockfight with high stakes, breaking into a drug dealer’s stash and salvaging stolen weed that’s gone for a spin in the washing machine. Meanwhile, his girlfriend, Alea (Christa B. Allen), ponders keeping the baby, convinced by her friends that it is “not the end of the world.” Bursting with chill Jawaiian (Jamaican-infused Hawaiian music) soundtracks, One Kine Day is a tribute to 808 pride. The script carries an authentic feeling of the local flavors and cultural norms woven into the fabric of Hawaiian life, with inside jokes and caricatures that are sure to please the locals, while giving mainlanders a taste of what “da kine” is all about. The writing does not overly dramatize conversations nor make the plot lines tie up neatly in one day, making it all the more believable. One Kine Day is a homegrown and highly enjoyable first effort.

The Taqwacores
Directed by Eyad Zahra
http://www.rumanni.com
Eyad Zahra’s The Taqwacores, based on the novel by Michael Muhammad Knight, is a coming-of-age story centering on kids from a Muslim American punk commune in Buffalo, NY. The film follows Yusef (Bobby Naderi), a babyfaced engineering student who discovers his new Muslim housemates are not what he expected. Umar is a dogmatic hard-ass who criticizes any deviations from his interpretation of the faith; Rabeya (Noureen DeWulf), a sexually outspoken female clad in a head-to-toe burqa; Ayyub, a shirtless prankster with hygiene issues; and Fasiq, a defender of marijuana. Jehangir (Dominic Rains), is the house leader who brings the Taqwacore West Coast Muslim punk scene to Buffalo for one legendary rager, and although the story focuses on Yusef in his fishout- of-water adjustment to his housemates, the heart of the film belongs to Jehangir. A truly captivating presence on screen, Rains delivers lines about Islam that in the hands of less apt actors would sound like platitudes. Zahra and Knight, who co-wrote the script together, carefully straddle the line between political commentary and fictional narrative without becoming heavy-handed in its message that Islam isn’t what you think it is.

Correction: Eyad Zahra's The Taqwacores was incorrectly titled Taqwacore: The Birth of Punk Islam in the print edition of DVD Reviews in Issue 24: The Survival Issue. Hyphen regrets the error. 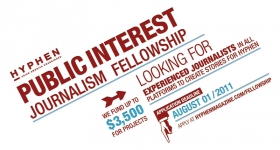