I've also heard, and seen, that bi/multilingual children learn to speak later. I know this to be true from my own experience raising my two year-old boy. He can say words and phrases in Mandarin, English and Vietnamese, but his speech was probably delayed a little compared to if he had just learned one language. I feel this isn't necessarily a drawback, because there really isn't that much of a delay. But I'm sure it can be frustrating for him when he knows exactly what he wants but can't communicate it. His personality, though, is like the opposite of mine -- he's totally outspoken, not shy and will talk in his own made up language when he can't find the appropriate Chinese/Vietnamese/English words.

Though there are some learning challenges, there's a lot of longterm gain, I think. For example, instead of focusing on speaking (which I should also), I delved into writing. I loved it because I could express myself more clearly in writing than speaking. They say that people who are fluent in multiple languages tend to be more creative, and may be interested in writing and other creative outlets because they see the world in a different way. You know how it is; sometimes you want to describe something and the best way is in your native tongue, not in English. I'm curious to know if there writers and other creative people out there who think that knowing another language has ultimately helped them.

I do agree with a previous commenter that it's up to the child how far they want to take their language skills, or if they will completely drop it. As a parent, I was shocked to read about a kid who spoke (in this case, Hindi) all throughout his childhood to high school, then completely stopped and now can't really speak it! But that's the thing about language -- it takes years and years and lots of effort to build up to fluency, but it doesn't take nearly as long to lose it.

Lately I have been thinking about learning more Chinese. I can't read or write and would love to be able to teach my child some basic reading/writing skills. 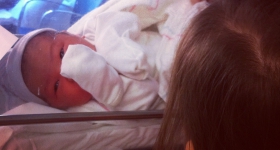