Returning to the podcast after being featured in a standout episode last season, actor, writer and feature film director Chris Naoki Lee expressed his excitement about making a meaningful return. Lee’s feature directorial debut, Dinner Party, has been drawing significant buzz across the festival circuit (including positive reception at SCAD Savannah Film Festival, Portland Film Festival and Studio City Film Festival in L.A.). Through some clever coordination, we pitched a fun idea: Why not bring some of the key cast along for the conversation? Imani Hakim, Kara Wang, Kausar Mohammed and Allison Paige answered the call in kind and convened with us in Culver City to join in on the fun.

The result was a “Hyphen in Hollywood” podcast first: a passionate, introspective actors’ roundtable-style discussion sharing insights from the creative process with a particular emphasis on the complex themes addressed in the film, and a discerning focus on the female perspective which is deeply integral to the film.

For Lee, the story had been brewing for several years: “It all stemmed from a simple logline: If you met your childhood school friends today, would you still fuck with them? And I found that to be very simple and profound because, especially in our time in this generation, the conversations we have, how does that change over the time in our lives?”

Inspired by the turbulent national conversation that took place in 2018 during the nomination of Brett Cavanaugh to the Supreme Court, Lee reflected on how that dialogue was firmly rooted in our time and used that social sentiment as the backdrop for his film, which deftly explores the lives of a group of childhood friends reunited for a dinner party after many years apart. Part slow-burn, part ensemble character study, the film builds upon the unease and discomfort in these conversations. For actress Kausar Mohammed, that unflinching approach was part of the film’s greatest strength: “It went into the ickiness of all these conversations about consent culture and the way it plays out. I think what the film does so beautifully is the way it touches upon the nuances in the ways it affects various people,” she said.

In this manner the film also opened up many unique opportunities for diverse perspectives to find interplay and resonance. Actress Kara Wang says, “There were certain lines in there that I will always remember when I read the script with Daniel Weaver’s character Vinny where I’m like, ‘Oh you know he’s more Asian than I am, and he likes to make dumplings.’ These are actual sentences that have been spoken in my life! It was so nuanced and it didn’t forgo my background as an Asian American woman but in so many ways it also wasn’t the only thing about my character that was important.”

For writer and director Chris Naoki Lee, his character’s identity was semi-autobigraphical, based on how inaction and conformity still impact Asian Americans navigating their identities in modern American society: “My character Cal represents in some ways this level of complicit-ness that we may all have felt at some point in our lives — the inability to speak loudly in a quiet room, that feeling that we’re so often trapped by social acceptance and assimilation, particularly as an Asian American male growing up around a lot of white friends and what that meant in the late ’90s/early 2000s to feel like I was a part of that group, especially when the media and everything I saw outside didn’t represent that.”

Thankfully for Lee and team, the complex issues raised within the film didn’t transfer over to the actual production, as they managed to pull off the incredible feat of filming the entire feature during the pandemic in four union days (which amounts to 26 script pages a day). This technical achievement alone deserves its own recognition, along with Chris and the rest of the cast for bringing a sharply resonant and necessary story into the fold. 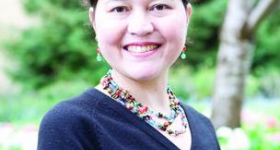 Learning to Breathe: A Tribute to Anabel Mariko Stenzel