Do stereotypical images reflect bad marketing or stilted writing — or both?

YOU WOULD THINK that in the publishing world where Asian Americans have had significant mainstream success we wouldn't still be subjected to exotified marketing. Yet when I sort through the Hyphen book box at our office, I see an array of stereotypical Asian images: lotus blossoms, flowing saris, flawless Asian faces. I know I'm not supposed to judge, but I sometimes have a hard time getting past the cover to read what's inside.

This may sound like a terrible admission for a book editor that I judge Asian American books by their covers. But let me ask you: Is Asian American culture only about chopsticks, geishas, fans and dragons? Or are we simply being reduced to stereotypes that sell?

Perhaps the trend of "chinking up" book covers comes directly from the success of Asian American authors. Last year, the National Endowment for the Arts study To Read or Not to Read showed that Americans are spending less on books than at almost any other time in the past two decades. So, since books about Asian Americans tend to do well - Amy Tan's stereotype-laden The Joy Luck Club (1989) still has millions of copies in print - publishers want to mark other books in the same way: with "authentic" cultural artifacts.

This makes me wonder if the pressure on Asian American writers to be "more Asian" hasn't grown worse lately. Judging by the endless memoirs about growing up in [insert Asian country here] that come through the Hyphen office, it seems that writers are succumbing to such pressure. Could it be that the bad book cover problem stems from (gasp!) the writing itself?

Henry Sene Yee, creative director of Picador Books, says that when it comes to book cover design, everything the designer does is coming from the book. "If you are an Asian American and you are writing about 18th century China, the writer is pigeonholing themselves in a way," Yee says. "Asian writers who are only writing about the Asian experience that limits [the designer] to work[ing] with certain images."

Yee is working on the paperback cover of Don Lee's farcical novel, Wrack and Ruin, about Lydon Song a sculptor who flees New York City to be a Brussels sprouts farmer in a coastal California town, only to have his brother try to sell the land to developers who want to build a golfcourse resort. So far, Yee has a close-up image of a Brussels sprout on a golf tee.

"His book isn't just about the Asian experience or the culture," Yee insisted, "so it was easier to come up with an idea."

Yee says the publishing industry is all about recognizable codes: "Russian constructivist font for Russian books; torn paper and beige for Westerns; italics, diamond rings and legs for women's fiction," he says. "The writer is tapping into this culture; so is the designer, and so is the reader."

But Sunyoung Lee, editor of indie Asian American publishing house Kaya Press, argues that publishing houses deserve some of the blame: "Mainstream publishers typically do a terrible job of designing book covers for Asian American authors though things seem to have improved recently from where they were in the 90s."

But as Lee points out, it isn't just major presses making such covers. Take, for example, the Copper Canyon Press poetry book Spring Essence, published in 2000, a translation of the work of 17th century Vietnamese poet Ho Xuan Huong. On the cover is a photograph of a naked woman holding an enormous plate over her face.

"This was particularly upsetting to me precisely because Copper Canyon is such a wonderful press, with so many amazing authors and projects on their list, including this one," Lee says. "One of the points that [translator] John Balaban makes in his intro is that there are tons of double entendres in [Ho Xuan Huong's] poetry . . . that it was far racier than you might suspect. But to try to sell a Vietnamese classical female poet a literary hero, in fact with a naked, faceless woman! It still makes my blood boil."

Lee thinks that Copper Canyon had good intentions and probably didn't think the cover would be considered offensive. "But in a way, that's precisely the problem. They don't even see what the problem might be."

Writers and readers need to take the publishing industry to task for the way it pressurizes both the content and the marketing of Asian American books. Maybe that's what it would take to shift the focus to what's most important: the writing.

Neelanjana Banerjee, Hyphen's Books Editor, is only judgmental when it comes to books, really. 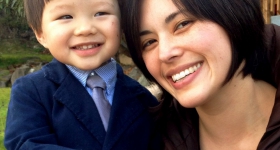